My most favorite interview question I’ve come across yet was “You type ‘google.com’ into a browser address bar and hit

Someone could talk for days on end trying to answer that with some form of completeness. How deep will they go? Strictly for fun, I’m going to put my answer here. When I was asked this in an actual interview, I rambled on for a good 10 minutes before they stopped me. And then I kept remembering things I forgot to include even after the interview finished.

I’m going to keep this formatted as a wall of text because that’s how it felt to answer this question in conversation.

The browser is going to analyze the input. Usually if it has a “.com” it won’t think you’re typing search terms. And once it decides it must be a URL, it’ll check that it has a scheme, if not, it’ll add “http://” to the beginning. And since you didn’t specify a number of HTTP protocol features, it’ll assume defaults, like port 80, GET method and no basic auth.

Then it’ll create an HTTP request and send that. I’m not confident in my low level networking knowledge but if I was I’d say something about the MAC address, TCP packet transfers, dropped packet handling. But anyway, a “google.com” DNS lookup will happen, and if it’s not already cached a DNS service will reply with a list of IP addresses, because “google.com” doesn’t just have a single IP address. Browsers will pick the first one by default I believe. Not sure if they’re regional or how the list works, but I know it’s there.

So the HTTP request jumps from node to node until it gets to the IP address of google.com’s load balancer. It wouldn’t last long, Google would respond that you need to be using HTTPS – assuming with a 301 permanent redirect. So it would go all the way back to your browser, the browser would change the scheme to HTTPS, use the default 443 port and resend. This time the TLS handshake would take place between the load balancer and the browser client. Not 100% on how that works but I know the request would tell Google what protocols it supports (TLS 1.0, 1.1, 1.2) and Google would respond with “Let’s use 1.2”. Then the request gets sent with TLS encryption.

I think the next thing Google would do is put it through web application firewall rules on its load balancer to see if it’s a malicious request. When it passes, the secure connection has probably been terminated (because PCI-DSS regulations say you don’t need to encrypt internal traffic) and the request would get assigned to a pool in their CDN, and the google-side cached homepage will be returned in an HTTP response. Probably pre-gzipped.

Google’s response header would be read by the browser, cached according to the response header caching policy, then the body would be un-gzipped. And because it’s google it’s probably ultra-optimized: minified, likely a lot of pre-rendered content, inlined CSS, JavaScript and images to reduce network requests and the time-to-first-render. But that request will trigger a cascade of other requests, all concurrent because it should be running HTTP/2. While those requests are being made, JavaScript would be parsed, probably not blocking because they used the defer attribute on their tags – or async, I never did read about what those did individually.

But the browser has probably already rendered the search box and is working on the toolbar at the top, which is going to take some extra network requests – I probably already have a cookie or maybe local storage with an OAuth token – or maybe I’m using Chrome and it already knows who I am, and that request with auth gets sent to their Google+ API that tells the Google search page application who I am.

Another request would be sent to get my avatar image. At this point they’ve already browser-sniffed to see if I wasn’t using Chrome, in which case they would have popped-in a tooltip to tell me that Chrome is awesome and I should be using that instead of anything else.

I think it would quiet down at that point. All taking place in a fraction of a second.

What is observably different?

In a formally structured answer, you’d probably reference the OSI Model, which I know of but am not well versed in. After looking it up, I take it network layering maps like this:

Above is a file comparison of the IE 11 and Chrome responses – both logged out.

Lets dig into that rendering! 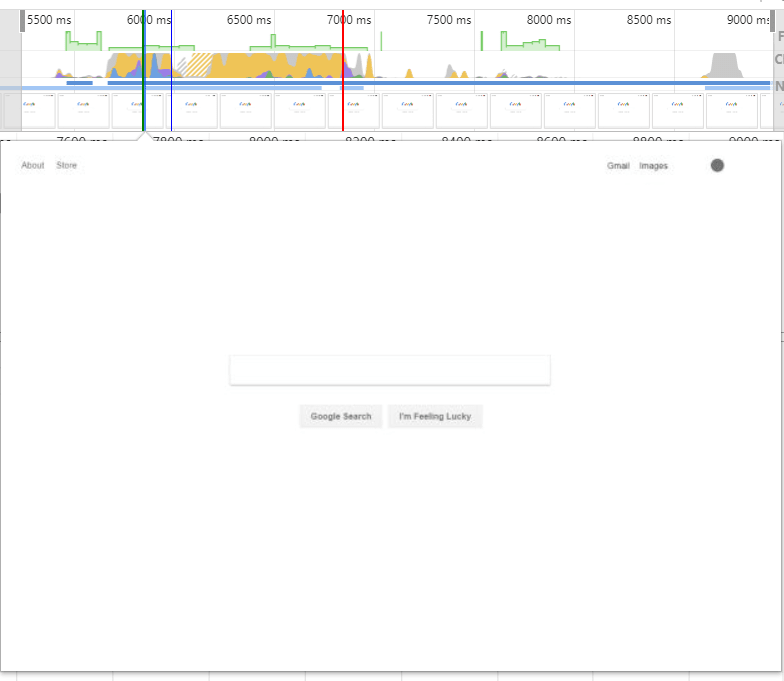 That pic above is the first screenshot Chrome will give you.

What about the question itself?

You know what? Maybe it’s not that great of an interview question for a developer since the answer has so much networking involved. It’s the format of the question I like, something open ended, that includes some guessing. That gives the interviewer the opportunity to follow up with questions like “How do you think TLS is established?” to see how the candidate thinks, see how creative they are, see what their limit is (how patient?).